Well, it’s been a hectic few weeks since the Supermoon…a veritable roller coaster of deeply disturbing world news, with a blog writing itself in my head all the time but not given the space or time to manifest. And now I’m at risk of alienating readers with my outspoken views….. so it goes. 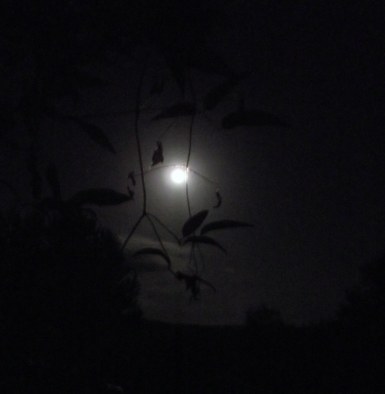 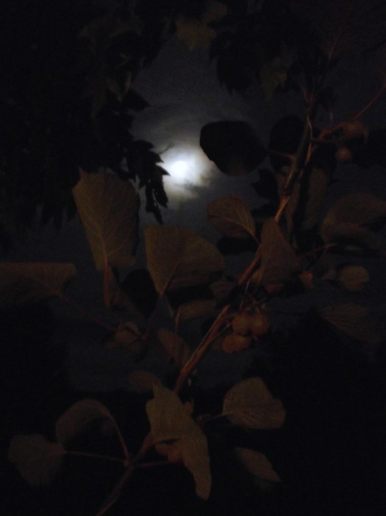 A few days before the full moon, I was making signs for a candlelit vigil for Gaza.That evening I sat out on my verandah, bathed in moonlight, and I had an overwhelming feeling of Oneness with all Humanity….One World, One Sun, One Moon shining down on all Beings….one Earth to cherish. 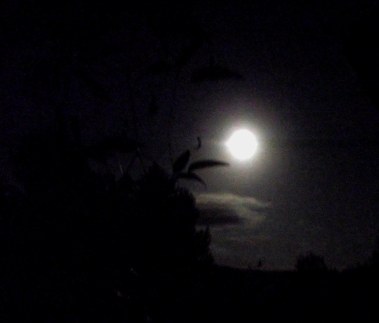 As with sunsets, it’s impossible to convey the feeling off a full moon with a photograph…you need to feel the temperature, hear the sounds of the night….but when I see this photo the feelings I had that night all come back to me.

And yet for most of the last two months, I have not been meditating in the Peace and Light, but have been immersed in the growing outrage over what has been happening in Gaza….hardly reported in the mainstream news.
I have a Love/Hate relationship with Facebook, but it has been one of the only sources of real news from and about Gaza. Articles on the 66 year history of the conflict, photographs showing the extreme disproportionality of the bombing from Israel compared to the rockets from Gaza, with appalling consequences for the Palestinian civilians, and reactions from Jewish people and holocaust survivors speaking out against the Zionist Genocide…for that IS what it is, plain and simple.
And on social media, ordinary people are educating themselves, finding a voice and coming together to speak out….we cannot just ignore what is done “In our name”.
It doesn’t take too much thinking to find out why this information is not in mainstream media… World governments, and the shadowy Capitalist drivers behind the Governments and the Media, have been funding armaments on both sides, with the self-interest of accessing oil, and protecting “their” supply lines;  when you are tied in economically, morality can go out of the window.
With the dearth of real news in the mainstream media,. it fell to social media to inform people, and the facts and images were truly horrifying. I won’t burden you with that, but I do believe that the increasing outrage, horrifying daily reports, and photographs of people coming together in massive, worldwide demonstrations may have contributed, in small part, to the latest ceasefire. 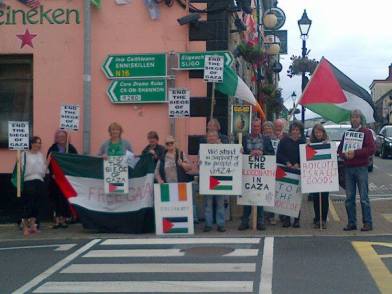 I live near a small town in North West Ireland, and every week a small group of us gather for an hour; it has been great when folk stop to chat about what’s happening in Palestine….when there was no real coverage on the news.

There is a page set up on Facebook, Light in Support of the People in Gaza, which encouraged folk worldwide to light a candle on the 9th of August at 10 pm, take a photo and post it up.Here’s a group of friends at my house, where we had a simple meal together, and stood in silent meditation for Gaza. It felt good to share heartfelt thoughts and prayers with other folk all over the world. 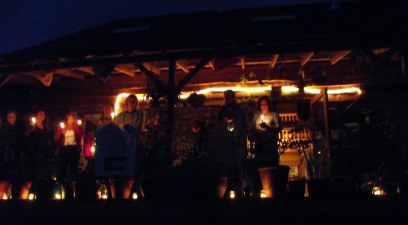 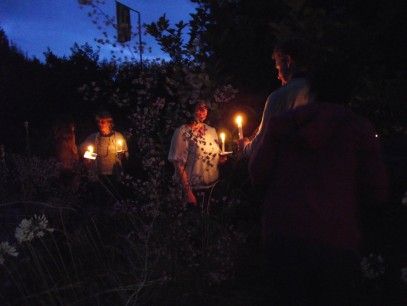 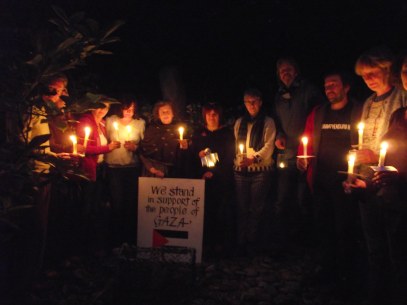 After four young Palestinian brothers were shot dead whilst just playing on a beach, a freelance photographer, Brian Farrell, put out a call for 300 children to gather on a local beach here, to represent the 300 children killed in Gaza; 320 children turned up with their parents…( I commandeered my Honorary Granddaughter!)and similar projects were done in the south of Ireland.On the actual day of the gathering up here, the number of Palestinian children killed had gone up to over 418, by the latest ceasefire the number was over 500. His photograph was featured on the front of the Irish Times, but sadly, the ceasefire in the headline below the photo did not last for any length of time. 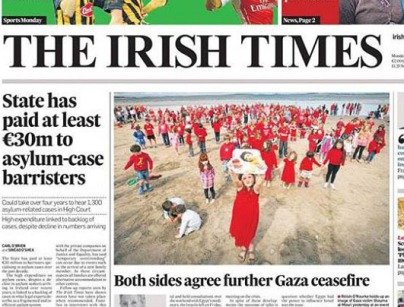 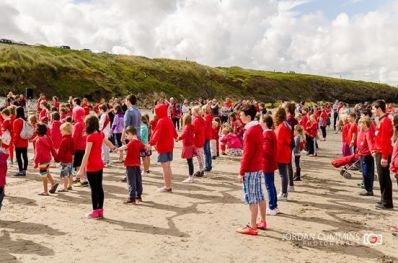 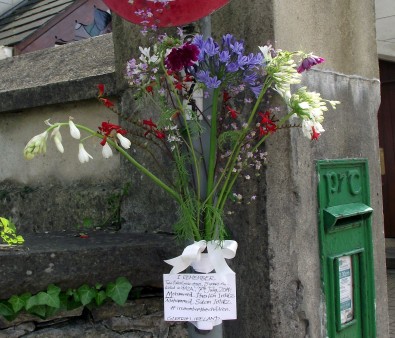 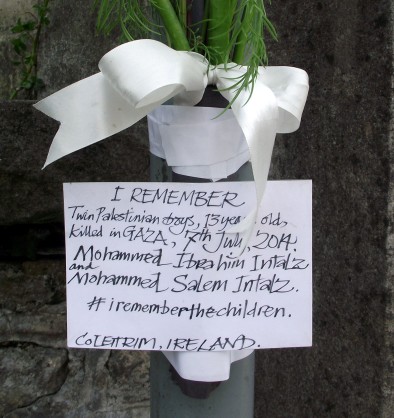 I was told that no Irish person would ever remove commemorative flowers from the roadside…but sadly someone saw fit to remove the label.WHY? People have been posting up such photographs of flowers all over Ireland and Britain, and some further afield, and in too many instances other people have removed the signs…I replaced the flowers and made a new sign, which thankfully has not been removed. 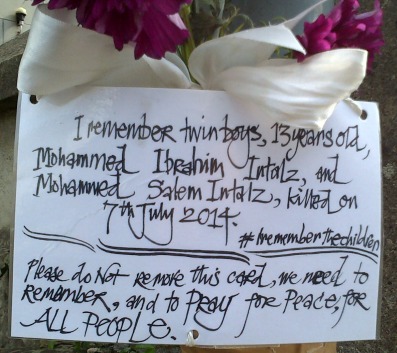 It was lovely that a commemorative bouquet was also put up for the only Israeli child that has been killed so far. Every child is precious….
It seems such a small gesture, but there have been heartwarming messages from people in Gaza, who have been touched by these gestures of solidarity for them in their plight. So many children left orphaned, so many shattered families grieving for children who’s lives have been so cruelly cut short….. http://www.gazaschildren.com/, and thousands of children injured, both physically and psychologically. How will these people EVER rebuild their shattered lives, homes, livelihoods?

It is 66 years since Britain, and the Oslo protocol, ‘gave’ Palestine to the Israelis, and Zionist forces expelled 750,000 Palestinians from their homes, committed 31 massacres, and destroyed 531 Palestinian towns…and how many more resurgences of war on Palestinians since then? At least three, and with a backdrop of constant bullying from the illegal settlers and Israeli armed forces in the streets…when the USSR collapsed there was a mass migration of Jews from Eastern Europe to Israel, and they have been illegally settled on Palestinian land.
At the end of the 19th century, Jewish people made up half the population of Jerusalem, but only 5% of the population of Palestine, with 10% Christians and 85% Muslims; all subjects of the Sultan of Constantinople, in the Ottoman Empire, an Empire with no frontiers, living in peace together……until the Brits, French and Italians went to carve it up……the rest, as they say………

So, what about the artists getting out of bed?
The time honoured role of creative people since the first cave paintings, the first written words, is to reflect; to mirror back an identity to their society. To work from, and for, Love…not just for money.
Here is a powerful piece from a Palestinian artist…it moves the heart far more than just words. 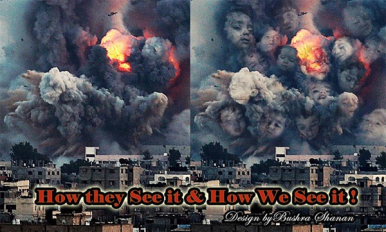 Along with small projects for Gaza, I’ve been involved with the campaign to stop Fracking on our tiny island. We had a 40 mile Tractor run of protesting farmers, with 140 decorated tractors joining in, and another event with a cavalcade of fishermen towing boats with signs, wanting to protect the pure waters of Ireland…(with typical Northern Irish humour, their groups are called F.A.R.T., Farmers Are Resisting Tamboran, and S.O.W., Save Our Waters..) We had choirs putting on performances, and a camp at the quarry where, unknown to the uninformed locals, drilling rigs were brought in at 4.30 a.m. I won’t elaborate on all that here, but we did manage to halt, however temporarily, the illegal setting up of a test drill. When politicians and councillors are offered “sweeteners” to turn a blind eye to the letter of the law, ( and Boy! that sure happens…20,000 euro given to a local business forum…), by multi-nationals who will be here just long enough to sell on in a Ponzi scheme, reap their profits, and get out before the pollution and devastation hits the fan, the ‘common people’ must keep their eyes open!

The timing of that, and the ceasefire in Gaza, allowed me to step back from the fray for a while, which was very serendipitous timing as I had an old friend from Scotland coming to help me sort through my chaotic shelves and drawers and stacks of artwork….I needed her to drag me kicking and screaming, and cast a professional eye over which pieces should go on the bonfire pile; clearing the decks can clear the mind summat wonderful!
My birth and adopted sisters are spread all over the world, but thank heavens for the Sisterhood! Three more dear friends came over for a day to help me blitz my woefully neglected garden, and seemed happy to go home with artworks and calligraphy…fair trade is infinately more rewarding than mere commerce, and breaking bread together and catching up with the craic is much more fun!

So now, I must return to the drawing board, producing artwork for a fundraising exhibition for Gaza. (However, as “Procrastination is the Art of keeping up with Yesterday”, I might just nip into WP to read all the posts I’ve missed from my favourite bloggers!) 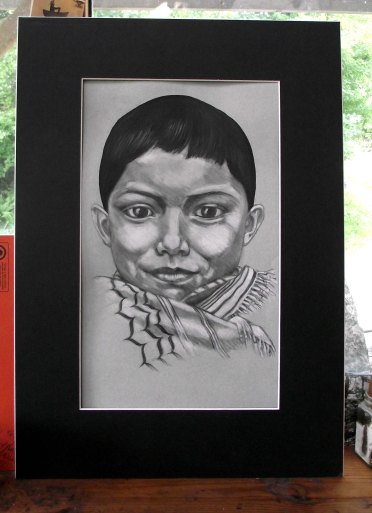 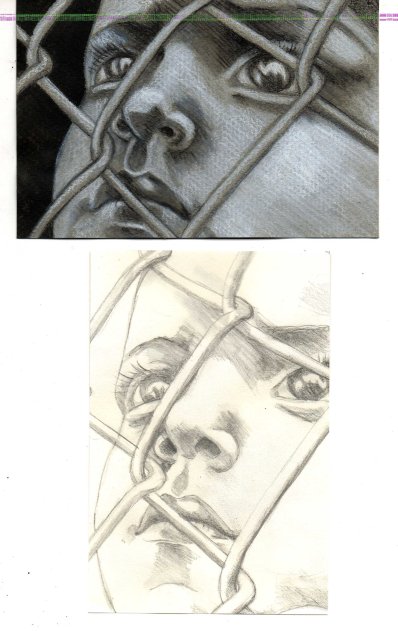 I’ll end with one of the most poignant poems I have read for a long time…it brings tears to my eyes every time I read it. 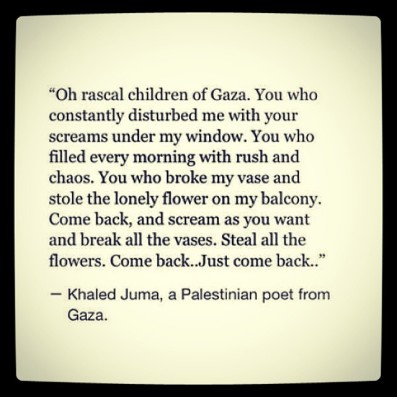 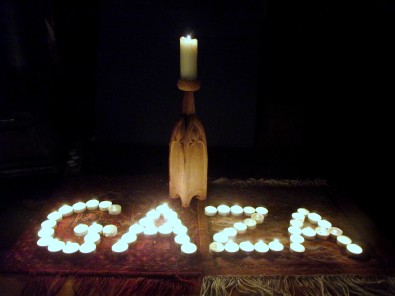 17 responses to “The Supermoon, Social Media, Genocide, the Sisterhood, and Why Some Artists Get up In The morning.”

Leave a Reply to The Earth Beneath My Feet Cancel reply