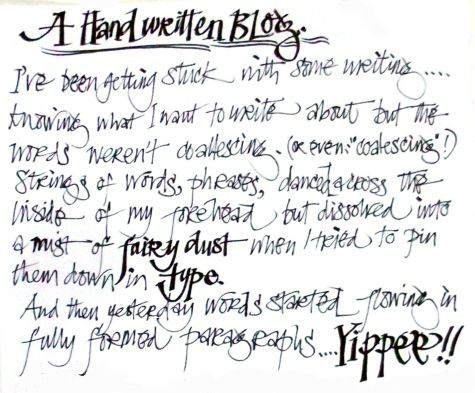 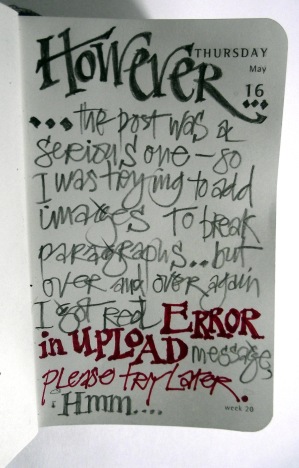 This was when I wanted to scream….but I’ve never been able to scream, or really lose my temper…..this relates to the content of the blog I had FINALLY started writing…. dammit!

Well, that lot was scribbled on empty pages from boring days in last year’s tiny diary ……. I couldn’t face wrestling with computers anymore.  I did discover what had happened…my mistake…I had TWO Edit Post pages open….and ‘Save Draft’ had been on the wrong Draft page…Shucks!
I can’t rewrite that blog yet….I’d be trying to summon up the words and phrases I wrote two days ago, and tripping over meself again….so I’m going into distraction/diversion mode……

I’ve written before about the mountains of sketchbooks and notebooks and papers and photos, letters and cuttings and diaries….this blog is a last ditch attempt to find patterns, to sift and cull these mountains….although the temptation to have a giant bonfire always lurks in the back of my head!

( Jeez…what with paper and with wood, I’ve used a helluva lot of trees in my life! But I’ve planted many, too.)
My Lost Blog was prompted by the horrendous stories coming out in Ireland  about the mother and Baby homes, and orphanages…and was ‘Open Heart Surgery’ about being orphaned and what a lack of roots lays down in the psyche; hard to write in the first place, but I will rewrite it eventually…meanwhile a diversion into Calligraphy!

As a left handed child, I suffered greatly at primary school, and beyond, for my appalling handwriting….endlessly made to rewrite essays and write out “lines”….but at least they didn’t force me to use my right hand, and it did lead me into an absorption with Type, and Calligraphy.
Now, Calligraphy is totally unnatural for a ‘sinister’ (left handed) person…you really need to pull the pen from left to right, to get smooth flourishes, but I’ve always been bloody minded about things I wanted to do, and now I’m pretty well ambidextrous… with a fine line in mirror writing for ‘secret’ notes!

A Rough for a quote from a Mary Oliver poem.

A Rough for The Goal of Life….

The Goal, Rough 3…more pleasing than the final piece, which I over-worked.

And a  couple of photo’s of applied type, in an ongoing drawing….

A working title for the blog that disappeared was given to me by a friend,  joking about my options…”Suicide, Homicide, or Genocide?”.  Well, none of the above, but I’ll get back to that!

8 responses to “Impatience, Frustration, an Inability to Scream, and Drawing Thoughts.”