Last week a swallow had got into my house….I’d had swallows nesting under my verandah roof for some years now, but they didn’t return for the last two years.

Spot the swallow….impossible to photograph as you see it, aren’t human eyes brilliant in their ability to refocus instantly!

This ceiling is 22ft high, the open-plan room 27ft long, and this poor bird flew up and down, up and down, resting on beams before resuming his flight path.

The swallow about to land on the beam, again.

I opened all the windows and skylights that I could reach upstairs, and doors and windows downstairs,  but his (or her!) flight went on for some hours. Enlisting my neighbour for bright ideas,  I remarked on my worry it would be exhausted, to which he reminded me that this bird had flown here from Africa!
Which reminded me of a wonderful experience in 2010. I was in Marrakesh in February, and from the rooftops I had watched the swallows gathering together in readiness for their flight north.

No swallows in this photo, but magical memories of hearing the call to prayer at sunset.

And then the joy, a couple of months later, seeing the swallows arrive in the North West of Ireland…so awesome to think of their journey.
Back to the story.
Eventually the bird found it’s way out of the house…relief all round.

Now we skip to a few hours later; sitting in the house in the evening, my neighbour noticed a wee cat poo on the floor. I had moved the litter tray outside, as I thought new rescue cat Rasta was now used to going outside….as opposed to the litter tray, or the large plant pots around the house. 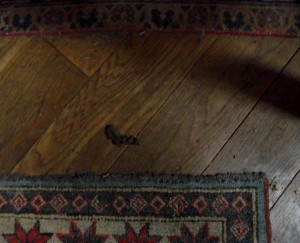 I leapt to my feet, got Rasta by the scruff of the neck, and was about to put his nose in it, when I realised our mistake…..it wasn’t cat poo at all, but a filthy cobweb that the swallow had knocked from the beam! I was mortified, and made a huge fuss of Rasta, and as he’s a total love junkie, he settled into being loved as if nothing had happened, bless him!

Rasta when he arrived, so named as they’d had to cut great dreadlocks off the wee mite!

My neighbour and I are now booked in for eye tests!

6 responses to “Spot the Swallow, (note to Self: Go to Specsavers!)”